When student teachers start teaching mathematics, they find out quickly that children learn differently and at different rates. Consequently, after a period or two of school placement, student teachers appreciate the need to differentiate their instruction for the diverse learners in their classes. But knowing that differentiation in instruction is necessary is different to being able to teach in a way that acknowledges the different rates and ways in which learners learn. “We need to see concrete examples of differentiation” they say.

There are many ways of differentiating and in the next few blog entries I am going to describe some that I use. In doing so, I shall describe concrete examples of differentiation in lessons. There is a tension in providing specific, concrete examples. I want to give enough detail that a student teacher (or teacher) can follow what I am describing. Yet, I hope that the strategies described could be applied in situations where a teacher is teaching a different age group or a different topic. 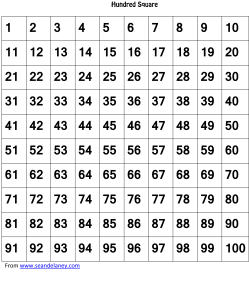 Imagine the following classroom scenario: A teacher has just asked some children in second class to do the calculation 61-24 and one child, Jack, calculates it using a hundred square to come up with the answer 45. Although Jack’s answer is wrong, there is much that he and his classmates can learn from the error. Let’s imagine that the subsequent classroom discussion takes place along the following lines:

At this stage the teacher can see that Jack subtracted the tens correctly but made an error that is commonly made when learners need to “go back” one on the 100-square from a number with a 1 in the units place. It’s difficult because it involves moving from the extreme left of one row on the 100-square to the extreme right of the row above; this is something that children don’t need to think about when using a number line. The teacher decides to see first of all if other students followed what Jack did.

The teacher notices that there may be a difference between what Jack said he did and what Tom said Jack did. Tom refers to counting back, which suggests that he counted back one by one, whereas Jack seemed to suggest that he jumped back in tens from 61 to 51 to 41. The teacher decides to check this out.

Robert’s way of checking is fine but it involves moving away from the 100-square so the teacher acknowledges his way and looks for a way to check the strategy on the 100-square itself. Now the teacher knows that Ciara can subtract on the hundred square going back correctly from a number with a 1 in the units digit, something that will be used later.

Teacher: So, let’s go back to the main calculation we’re working on, 61-24. Who can remind us of how Jack said he did the calculation? David.
David: He went back ten to 51 and ten more to 41. Then he went across from 41 to 45.
Teacher: Maria, you didn’t agree with Jack’s answer. Why is that?
Maria: The answer is 37.
Teacher: How did you figure that out?
Maria: I did it in my head.

Maria has figured out the correct answer but she didn’t use the 100-square to do so. The teacher could ask Maria to explain how she did the calculation in her head. But for now the teacher wants to help Jack see where he went wrong in using the 100-square to find his answer.

Teacher: So, Jack tells us that the answer is 45 and Maria tells us that it is 37. How can we use the 100-square to tell us which answer is correct?
Rebecca: Well, if you do it the way that Jack did it, you can begin at 61 and go back ten to 51 and ten more to 41. Then you have to count back four more, going 40, 39, 38 and 37.
Teacher: So you agree with Maria that the answer is 37. Jack, how is what Rebecca did different to what you did?
Jack: Well, she started off the same way. But when she got to 41, she went to 40, and back to 37, and I went to 45.
Teacher: What are you thinking now?
Jack: I’m not really sure. I know that both answers can’t be right.
Teacher: We seem to agree that you go as far as 41. But then Jack thinks that you count across to 45 but Rebecca thinks that you go from 41 to 40 and to 37.
Sarah: I agree with Jack.
Teacher: Ciara, what do you think needs to happen when you get to 41?
Ciara: Well, the calculation is subtraction. So you need to go back from 41. Jack counted on to 45 but you need to go back to 40, then to 39, then to 38 and then to 37.
Teacher: What do you think of that Jack?
Jack: I agree with Ciara. It’s 37.
Teacher: What is different about how Ciara did it?
Jack: She went back from 41 and I went forward, but I should have gone back.
Teacher: Why might Jack have gone forward instead of back?
Mark: After 41, you couldn’t go anymore to the left, so Jack went to the right. But you need to go up to the next row, start on the right side, and go left from there to go back.

Clearly in the above classroom, the children were at different stages in their knowledge of how to subtract using a hundred square. Jack knew how to subtract tens but not units when subtracting from a number with a 1 in the units place. Sarah also has problems with this. Maria can calculate but possibly finds it difficult to articulate how she does so. Tom and (most likely) Robert are still counting back in units, even from large numbers where it would be more efficient to count back in tens. Ciara is able to subtract and able to articulate how she does it and why. Mark, too, is able to identify a possible error and state why it is an error.

The teacher made moves to differentiate instruction and made it possible for the children to share ideas and strategies:
1. By asking Tom to repeat how Jack had solved the problem, the teacher highlighted the initial mistaken strategy so that the children could work with it.
2. The teacher got Jack to compare his strategy with Tom’s so that Tom (and Robert and others) could learn about counting back in tens.
3. The teacher “amplified” a useful strategy by asking Robert to describe for the class Jack’s strategy for subtracting ten on the hundred square.
4. The teacher is continuously assessing what the children know and need to learn. For example, once the teacher knows that Ciara understands how to subtract across lines on the hundred square, the teacher can use this knowledge later in the lesson.
5. The teacher does not tell the children which answer is correct, which would foster dependency on the teacher. Instead the teacher encourages the children to reason with one another about which answer is correct.
6. By highlighting a common error alongside the correct strategy, the teacher hopes that other children won’t make the mistake that Jack made at the outset.

In short, the teacher in this episode practised differentiation of instruction by bringing multiple conceptions and misconceptions to the attention of the class and using them as resources to direct more children to practise competent subtraction strategies using the hundred square.

Does such a painstaking explication of a small teaching episode make it easier for a student teacher to try and differentiate in this way? Or is this kind of teaching too difficult for a beginning teacher to practise?

This entry was posted in Practice of Teaching, Teacher Education, Teaching Maths. Bookmark the permalink.